PALMETTO — Fred Hodges can still remember the names and faces of neighbors who are long gone.

There was Irving, who adopted his lifelong partner, Ron, so they could have some sort of legal recognition while same-sex marriage was still banned in Florida.

There was Emery, a doctor who advocated for the health of coal miners and AIDS patients and eventually was murdered in what was rumored to be a hate crime.

And there was Jan, who died of lung cancer last year without any known relative. Hodges paid a private investigator in Indiana to find the beneficiary named in his 20-year-old will.

“It’s bad when you live by yourself, and you don’t have anybody,” said Hodges, whose partner of nearly a half-century died in 2019. “Which is why, here in the Palms, we’re a family.”

The Palms of Manasota, nestled inside a sun-kissed side street in Palmetto, was touted 20-some years ago as America’s first retirement community for LGBTQ people.

“We’re still here,” said Hodges, who is 71. But the number of LGBTQ residents is dwindling.

He stopped by a “For Sale” sign in Carol’s yard, which could lead to another straight person moving in.

Walking into the Palms of Manasota is like entering a postcard for Florida living.

Spanish moss adorns every oak tree, and manicured palms line the streets. A pool with a fountain, complete with a single turtle, tops it off.

There’s no hint of the parties that once brought the neighbors out into the street. There’s not a rainbow flag in sight — but it was always that way.

Inspired by a friend who had faced discrimination at his nursing home after disclosing his sexuality, Laing envisioned a place where members of the LGBTQ community could live out their later years in safety among their peers.

It was radical. Newspapers around the globe — from The Wall Street Journal to The Economist — reported on construction of the nation’s first “alternative lifestyle retirement village.”

Straight people weren’t barred from the community, but the Palms’ founder was clear: The community would be built for and marketed to LGBTQ seniors.

“It’s going to have to be gays and lesbians or people who understand the lifestyle,” Laing told the Sarasota Herald-Tribune in 1994. “We’re not going to turn anyone away.” Laing, who was gay, lived in the community until his death in 2000. 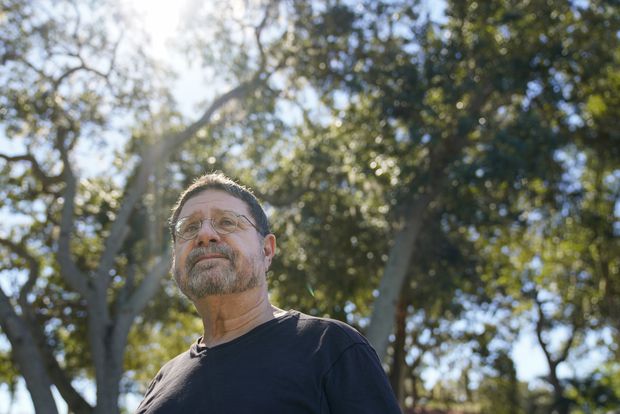 Longtime resident Fred Hodges, 71, thinks back to the people who have come and gone during his time living at the Palms of Manasota, dubbed the first LGBTQ retirement community in the United States, last week in Palmetto. [ MARTHA ASENCIO-RHINE | Times ]

When Hodges and his partner, John, moved into the Palms in 2002, there were 21 single-family homes and six condominiums, The Economist reported, with plans to bring in another 250 people.

Subtlety was the word from the start. Early homeowner bylaws forbid residents from putting up flags of any kind, according to Hodges.

“The original owners here came to escape the prejudices of being gay and lesbian,” he said. “It’s not a gated community, so they did not want to advertise, ‘Homosexuals live here. Beat us up!’ ”

Originally, Laing planned to build an assisted-living facility inside the Palms, so residents could age in place.

But the developers who took over after Laing’s death filed for bankruptcy in 2010, halting construction on the property for years. The undeveloped land was sold to the bank, where it remained dormant until it was bought by Meridian General Contracting in 2020.

Many of the original residents have died. Others moved into long-term care homes. Hodges estimates that most of the remaining LGBTQ residents are over 70.

Many retirement communities designed for LGBTQ seniors that sprung up in the wake of the Palms have struggled financially.

But there’s growing interest in — and need for — LGBTQ-specific housing, according to Sydney Kopp-Richardson, director of the National LGBTQ Elder Housing Initiative at SAGE.

These seniors — particularly transgender elders and older adults of color — are at heightened risk of experiencing violence, lack of familial support and economic instability, Kopp-Richardson said. Many LGBTQ elders report fearing they’ll face discrimination and have to “re-closet” themselves upon entering a retirement community.

“All of these factors magnify the isolation that is already huge for seniors,” Kopp-Richardson said. “So an affinity-based space with your peers, in your community, can really help with your social, mental and physical health.”

Retirement communities designed for LGBTQ seniors face a delicate balance, however. Under the federal Fair Housing Act, a community cannot keep someone from moving in because of their sexual orientation.

“You can’t enforce that only LGBTQ people live there or give LGBTQ elders priority,” said Kopp-Richardson. “So if there isn’t intentional marketing, outreach and sustained programming, there’s no assurance that that space will stay LGBTQ-friendly or affirming.” A rainbow is created at the fountain in the middle of the pond at the Palms of Manasota, the first LGBTQ retirement community in the United States, last week in Palmetto. [ MARTHA ASENCIO-RHINE | Times ]

Exactly when Palms properties stopped being advertised as part of an LGBTQ retirement hub is up for debate. Gay and lesbian residents say things changed gradually once the bank took over — with a slow drip of new residents moving into empty units.

“Whoever bought after that was straight, pretty much,” said Mary Cumisky, 80, a homeowner since 2002 who identifies as lesbian. “One after the other.”

“When I saw a Realtor showing it to people, I’d go out and introduce myself and say, ‘Did you know this is a gay and lesbian retirement community?’ ” Hodges added with a laugh. “Yup, gay and lesbian! It’s a beautiful place, you should move here!”

One thing is clear: The land that used to comprise The Palms of Manasota won’t be advertised as an LGBTQ retirement community in the future.

“That question never entered our minds,” said Kelly Frye, president of Meridian General Contracting. “We understand that the LGBTQ community is as equal as any other human on the face of the planet. We just market to human beings. If you want to live there, you’re free and welcome to.”

Today, LGBTQ retirees own 14 of the 21 single-family homes in the Palms, Hodges said. Two of those are rented to straight people. The villa area is even more mixed, and new homes will be open to anyone.

“Back then, there was a need for that camaraderie and being together and that security,” said Hodges. “It’s now 2021. We have come a long way. There’s still obviously hatred, but not near like it used to be. So there’s not really a need for it. I do miss it, though.”

‘We care for each other’

But a remnant of the old days remains.

It’s Friday at 5 p.m., and six neighbors are meeting for weekly happy hour at Cumisky’s house — she has the lanai that overlooks the pond, after all. 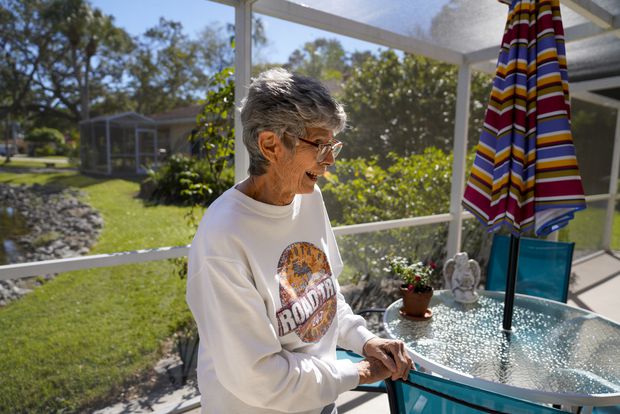 Mary Cumisky, 80, is pictured in her lanai, at her home at the Palms of Manasota, dubbed the first LGBTQ retirement community in the United States, and located in Palmetto. [ MARTHA ASENCIO-RHINE | Times ]

Most of them are members of the LGBTQ community, but a straight neighbor who recently lost her husband also joins.

“Sometimes it does turn into group therapy,” Cumisky said.

“No, no, I thought it was important because we all live by ourselves, and we don’t get a chance to talk deeply about things,” Cumisky said.

“It’s big, because I’m by myself,” she said. “You’re by yourself. Sandy has a family, but they’re not around.”

An all-LGBTQ retirement community might have been a dream, but the concept of ‘chosen family’ lives on in the Palms.

“When I had to have my hip replaced last February, I didn’t have anybody at all to help take care of me,” Hodges said. “And Mary was my nurse. She actually used to be a psychiatric nurse.”

“We care for each other,” Hodges agreed.

“It’s what’s left of the Palms, the original idea,” added Cumisky. “We still have the feeling for it. And for each other.”

This article was originally published in Tampa Bay Times on November 15, 2021. 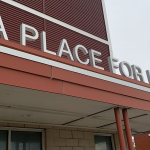 Ohio’s first LGBTQ+-inclusive senior housing easing fear of going ‘back into the closet’Discrimination, Housing, In the News, LGBT Aging