For LGBTQ+ elders, Ty Martin is SAGE’s sage in Harlem

The first time Ty Martin stepped into the newly built Whole Foods on 125th and Malcolm X Boulevard, he thought he was in Chelsea on account for the grand assortment of young, gay white men present. Harlem certainly looks different from his childhood days. Martin, 74, grew up in the neighborhood during the ’50s and ’60s, when he was a gay young man himself.

“I learned how to be invisible,” he said. “It wasn’t about being my authentic self—we didn’t have terminology like that [back then]. I learned how to act so I didn’t cause attention. The way I’m sitting with my legs crossed? That was a no-no.”

And there was no SAGE Center in Harlem back then. The doors opened in 2004. Today, Martin works out of the senior center as the Harlem Community Liaison for SAGE, the oldest and largest organization for aging LGBTQ+ Americans.

The SAGE Center Harlem is open to all older folks, but Martin hopes the space can replicate the familial community hetereosexual elders frequently enjoy as parents and grandparents for LGBTQ+ seniors. Additionally, they often still battle with age-old stereotypes and are less open to meeting new people. And there’s the matter of losing their peers—Martin initially got into advocacy after seeing friends die from HIV/AIDS in the ’80s. He went from the trendy blocks of Christopher Street to frequenting hospitals, hospices and funeral homes.

“That became my new lifestyle,” said Martin. “Buried some of my peers who were abandoned by their families. So that’s how I became more into helping people and caring about people that I didn’t have time to deal with my ego and self worth. It was about something bigger than me, more important.

“I was just exhausted, but not sad. And I began to numb those feelings. So if you’d say to me, ‘well, how are you doing,’—well a good friend of mine’s died. It was so routine. By reconnecting with those who were living, I was able to get support from them.”

Through his work, Martin began branching out as he got older. He’s traveling, with a cruise vacation coming up. And he’s thrilled to attend a Diana Ross concert tonight. But the more extroverted Martin gets, the more he notices how reclusive other LGBTQ+ seniors are becoming in their advanced age. So he understands how important outreach at the SAGE Center Harlem is. Martin recalls recently connecting a local elder with a monkeypox appointment. He helps with case management, providing information and offering referrals. At his home, he pulls out a flier for a monthly food pantry SAGE hosts. Every second Wednesday, the first hour is for reserved seniors Martin proclaims.

Beyond the work, there’s something nice about giving, and getting, support. Even as a kid growing up in Harlem, Martin always knew someone had his back. Back then, it was his big brother.

“Thank God I was a middle child,” said Martin, laughing. “And my oldest brother was a bully. He was three years older than me. So he had a reputation and I just glided through school. In hindsight, I was probably a troublemaker, because I could get away with a lot of stuff.”

This article was originally published in Amsterdam News on September 15, 2022. 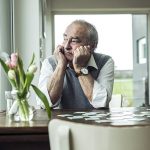 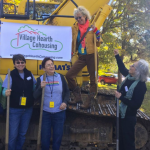