The History & Future of the Black Trans Rights Movement

In honor of Black History Month, SAGE will be sharing a series of posts from partners and constituents sharing their stories. Vera Lukacs shares her experience from attending an event at the SAGE Center Midtown. 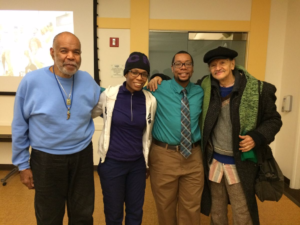 In recent years, the transgender rights movement has become more visible in the media and our everyday lives. However, trans people, and especially trans people of color, are being killed and discriminated at an alarming rate. According to the NCAVP’s Anti LGBTQ & HIV-Affected Hate Violence in 2014, 80% of homicide victims in 2014 were people of color. Furthermore, 55% of homicide victims were transgender women. “The transgender rights movement is something that feels new to a lot of people, and to other people, it doesn’t feel that new. But we don’t tend to recognize just how far back it goes and how intertwined it is with the history of the entire LGBT movement,” said Pony Knowles, the program coordinator for the event.

Some of Martin’s and Vazquez’s current heroes are Miss Major Griffin-Gracy and Kim Watson (who was scheduled to be a speaker at this event, but was injured and unable to attend). Both Watson and Miss Major are influential leaders in the black transgender rights movement. Jevon Martin, the NYS Chapter president of Black Transmen Inc., spoke about his own transgender heroes from the past, present, and his vision for the future. Martin began by showcasing transgender individuals such as Tracey Africa, a transgender African-American woman from New Jersey. She modeled all over the world from Milan and Paris, and eventually was the face of the Clairol Born Beautiful hair color boxes. Next on the list was Willmer “Little Ax” Broadnax, a famous musician born in Mississippi. It wasn’t until Willmer died that people found out he was assigned female at birth. Martin went on to talk about a few notable individuals, such as Marsha P. Johnson and Sylvia Rivera, two of the most visible pioneers in the transgender rights movement and Stonewall riots. 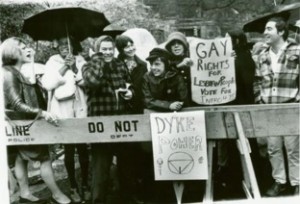 Kim Watson is the Co-Founder of Community Kinship Life, an organization that is dedicated to “provide the trans community with the tools needed to achieve their personal goals while having a sense of community and kinship.” Griffin-Gracy is the Executive Director at Transgender GenderVariant Intersex Justice Project, an organization that serves trans people who are currently incarcerated or are former inmates.

As the event drew to a close, it was clear the audience was left with an appreciation of a community they were not deeply familiar with prior to the meeting. This event, sponsored by SAGE, is part of a larger effort by the organization to bring visibility to the transgender community and create solidarity within the larger LGBT movement.