Bobby Rosenthal is a Care Manager at SAGE. In this role, he provides information, referrals, assistance with entitlements and benefits, and help with housing issues for both caregivers and care recipients.

Bobby has been a social worker for more than 15 years, working primarily with people living with HIV/AIDS. Prior to SAGE, he was an Intensive Care Coordinator at Callen Lorde, for a program designed to target at-risk patients who had fallen out of regular medical care and/or stopped taking their prescribed HIV medications, and get them re-engaged in care and achieve sustained viral suppression. Before Callen Lorde, Bobby was a social worker for the HIV/AIDS Initiative at the Actors Fund, where he did case management with entertainment professionals and ran groups for long-term AIDS survivors. As a volunteer, Bobby spent seven years at GMHC working on the AIDS Hotline, which helped ignite his interest in social work. Before social work, Bobby worked in retail in various Manhattan establishments such as Barney’s, Cole Haan, and Bloomingdale’s.

Having never served the LGBT older adult population in this capacity, Bobby is excited by the challenge SAGE represents. Bobby holds a master’s degree in social work from Hunter College. He is a theater lover, enjoys bike riding all over New York City, goes on adventures and road trips in his Fiat, and is passionate about international travel. He lived on a kibbutz in Israel for a year, and has visited Brazil 13 times. He is grateful for his short work commute, and is the proud father of a 5.6-pound Chihuahua named Erma. Bobby currently resides in Chelsea. 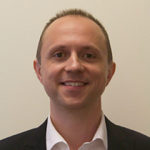