A few years ago, Nancy Kelly had a disturbing experience during an emergency visit to a small hospital outside Durham, North Carolina, where the 67-year-old from Swanville spends her winters.

She had severely sprained her ankle getting off the plane and needed help. She had been married to Kate DeHaven since 2013, the year after Maine voters approved a referendum to allow same-sex marriage.

But at the hospital, when she told the person doing the initial intake that her emergency contact person was her wife, she told Kelly not to disclose that information to others at the hospital.

“She said, ‘You don’t want to tell people that here,’ as if I’d get inferior care because I was married to a woman,” Kelly said. “This kind of thing makes you feel very insecure about how much you can tell people. It also causes you to develop fear and that is a loss of dignity. It can become a constant daily reminder that you are not part of accepted society.”

Kelly is among a number of LGBTQ snowbirds from Maine who don’t take the legal protections they are entitled to here with them when they head south for the winter the way heterosexual couples do.

While Kelly and DeHaven, who is 76, have taken all legal steps available to them, they still worry that when they leave Maine they will be discriminated against because of their sexual orientation.

That is why they support the passage of federal legislation banning discrimination based on sexual orientation and gender identification. Its passage would give members of the LBGTQ community who live part of the year in the Pine Tree State the same protections they are afforded under the Maine Human Rights Act when they leave the state.

The Equality Act would also include protections in the areas of public accommodations and federally funded programs, where sex protections do not currently exist, according to SAGE, an organization founded in 1978 to advocate for and support older LGBTQ citizens. The bill also updates areas of federal law where sex protections do exist, including employment, housing, health care, education, credit, and jury service, by explicitly prohibiting discrimination based on sexual orientation and gender identity.

An estimated 3 million snowbirds nationwide identify as LGBTQ, according to SAGE. The number who consider Maine to be their primary residence is unknown.

The need for federal legislation has become more urgent, especially following the Florida’s legislature’s passage earlier this month of a bill that would prohibit teaching and discussions about gender identity and sexual orientation in the state’s primary schools.

Kay Wilkins (left) and Diana Cate are shown in their wedding portrait. The women, who winter in Florida, support the passage of the national Equality Act to ensure they have the same anti-discrimination rights in every state. Credit: Courtesy of Kay Wilkins

Such legislation at the state level could be a precursor for new state laws that jeopardize the rights of LGBTQ residents, said Kay Wilkins, an 82-year-old Ellsworth resident who spends winters in North Fort Myers, Florida, with her wife Diane Cate, 86.

Despite the fact that Wilkins and Kelly both live in enclaves for lesbians in their southern homes, they and their spouses worry they could be denied medical treatment, be refused a place at a long-term care facility or be told they can’t spend their last days together as spouses.

Wilkins worries because Cate is not in good health and has dementia.

“I need to be recognized as her wife and caregiver,” she said.

Wilkins has been active in gay rights efforts for more about 35 years. She was thrust into the media spotlight in 1984 when Charlie Howard was killed in Bangor by three teenage boys who tossed him off the State Street bridge into the Kenduskeag Stream. He was unable to swim and had an asthma attack and drowned.

Wilkins was the president of the board of the Unitarian Church, which Howard attended. A special education teacher in Bangor, she became an advocate for gay rights and, later, same-sex marriage.

The Equality Act passed in the U.S. House in February 2021 and is now before the U.S. Senate in the Judiciary Committee but is stalled, according to the Washington Post.

Maine Reps. Jared Golden and Chellie Pingree, both Democrats are co-sponsors of the legislation. Independent Sen. Angus King is a co-sponsor of the Senate version.

Republican Sen. Susan Collins is not a cosponsor, even though she cosponsored a similar bill in 2019.

A Collins spokesperson said last year that the Maine senator sought further changes to the bill that cosponsors were unwilling to make.

This article originally appeared on Yahoo! on March 23, 2022. 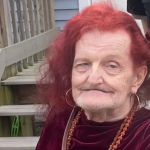