SAGE is thrilled to honor André De Shields, Stacey Friedman, and Leslie Jordan at the 2019 SAGE Awards & Gala on October 21, 2019! Accompanying the awards will be a guest performance from Tony Award-winning actress Laura Benanti. Read more about all these incredible individuals here: André De Shields
André De Shields is the triple-crown winner of the 2019 awards season, having won the Outer Critics Circle, Drama Desk and Tony Awards as Best Featured Actor in a Musical for his unanimously critically acclaimed performance as Hermes, Messenger to the Gods, in Hadestown. The Actors’ Equity Foundation followed suit with the Richard Seff Award, which honors veteran stage actors’ best supporting performance s of the year. Prior to his Tony Award win, Mr. De Shields was best known for his show-stopping performances in four legendary Broadway productions: The Wiz, Ain’t Misbehavin’ (Emmy Award), Play On!, and The Full Monty. In a career spanning fifty years, he has distinguished himself as an unparalleled actor, director, and educator, receiving in 2018 the 8th Annual Off Broadway Alliance Legend Award, and the 33rd Annual Bob Harrington Life Achievement Bistro Award. Among his other accolades are the 2009 National Black Theatre Festival’s Living Legend Award and the 2007 Village Voice Obie Award for Sustained Excellence of Performance. On August 19 of this year, His Honor Mayor Bernard C. “Jack” Young presented him with the Key to the City of his hometown, Baltimore, Maryland. Mr. De Shields is a proud member of AEA, SAG-AFTRA, and SDC. To learn more, visit: www.andredeshields.com. Stacey Friedman
Stacey Friedman is Executive Vice President and General Counsel for JPMorgan Chase & Co. She also serves as a member of the firm’s Operating Committee.

Most recently, Friedman was the Deputy General Counsel for the firm and the General Counsel for the Corporate & Investment Bank. She joined the company in 2012 from Sullivan & Cromwell LLP, where she was a partner in the firm’s Litigation Group, working on complex commercial litigation, including securities, class action, derivatives, bankruptcy, antitrust and employment. In this role, Friedman spent a year working with JPMorgan Chase full time as one of the principal architects of the firm’s mortgage-backed securities litigation defense. She also served as a key adviser to the firm in its acquisition of assets from Washington Mutual.

Friedman is one of the industry’s leading experts in securities litigation, and the investigations and enforcement proceedings relating to these matters. She brings tremendous experience working with the financial services industry and has represented numerous clients in federal and state litigation across complex commercial matters, including securities, class action, derivatives, bankruptcy, antitrust and employment litigation. She is a member of the board for the National Women’s Law Center, an organization dedicated to fighting for gender justice in the courts, in public policy and in society as a whole.

Prior to joining Sullivan & Cromwell, Friedman was a clerk for the Honorable Gary L. Taylor, United States District Court, Central District of California. She received her B.A. from the University of California, Los Angeles, and J.D. from Duke University School of Law. Prior to law school, she worked for Senator Dianne Feinstein.

Friedman has received numerous awards in recognition of her leadership across the legal and financial services industries, most recently ranking number two on the Financial Times’ Leading LGBTQ++ Executives list and #12 on American Banker’s “Most Powerful Women” list in both 2017 and 2018.

Friedman currently resides in Brooklyn, New York, with her wife and two children. Leslie Jordan
Leslie Jordan is one of the most consistently recognizable faces in popular entertainment. His journey towards stardom has provided one of the quirkier, impressive, and varied career trajectories of the past few decades.

His arrival in Hollywood back in 1982 (with $1500 sewn into his clothing by his steel magnolia Mother) was the starting point. After a brief career as a jockey, Jordan has enjoyed the full show-business spectrum; the lean days, the bumps in the road, the acclaim, reaching the pinnacle of television performing with award recognition, the ensuing victory laps, followed by an alarming and unexpected down slope, the dangers of being type cast or stereotyped, the challenges to remain “current” and “relevant” in a rapidly changing world of technological advancement, and the ever present threat of being put “out to pasture” by a youth obsessed culture and industry. Through it all, Leslie Jordan has remained constant, relevant and – above all – funny!

His ability to take it all in stride has kept him moving onward, upward and forward! Leslie Jordan is the prestigious Emmy Award winner in 2006 for “Will & Grace”. He has enjoyed rapturous reviews for his original stage plays (“My Trip down the Pink Carpet”, “Stories I can’t tell Mama”, “Fruit Fly”), and supporting presence in one of Hollywood’s most prestigious, message-minded films of the last decade (“The Help”, 2012). He’s been singled out with great notices for his off-Broadway musical theatre debut in 2011 (“The Lucky Guy”). His defining role as “Brother Boy” in the cult film sensation “Sordid Lives” evolved into a well received prequel on the Logo Channel.

As the celebrated author and star of his own HBO Special (“Pink Carpet”); Leslie Jordan remains consistently sought after as a Guest Star on every imaginable form of episodic, comedic television (TV Land’s “The Ex’es”, Fox’s “Raising Hope”, Disney Channel’s “Shake It Up!”, and ABC’s “The Neighbors”. He enjoyed a star turn in the third season of FX’s instant classic “American Horror Story” opposite Hollywood heavyweights Jessica Lange, Kathy Bates, Angela Bassett, Sarah Paulson and Francis Conroy. Additionally, across the pond, he recently appeared as a cast member/house occupant in the smash reality competition “Celebrity Big Brother UK” and in two seasons of ‘Living the Dream” for SKY TV/UK. In 2017 & 2018 Leslie Jordan again sparred with his lovable nemesis “Karen Walker” as a guest actor in the triumphant return of “Will & Grace”. More recently Mr. Jordan scored a lead role playing SID in THE COOL KIDS alongside comedy heavyweights Martin Mull, Vicki Lawrence, and David Alan Grier.

Leslie Jordan has conquered the international stage with sold out runs in Mexico, Canada and the U.K., and remains an in-demand mainstay as a Stage / TV / Film performer, voice-over artist, fund raiser, spokesperson, out artist, equal rights activist and all around Southern Baptist celebutante. Tony Award-winner and five-time Tony Award nominee Laura Benanti is a highly celebrated stage and screen actress, who recently ended her critically acclaimed run on Broadway as Eliza Doolittle in Lincoln Center’s revival of “My Fair Lady.” Other Broadway credits include Steve Martin’s Meteor Shower, Amalia Balash in She Loves Me (Tony and Drama Desk Award nominee), Gypsy Rose Lee in Gypsy opposite Patti LuPone (Tony, Drama Desk and Outer Critics Circle Awards), Women on the Verge of a Nervous Breakdown (Tony nomination, Drama Desk and Outer Critics Circle Awards winner), Into the Woods (Tony, Drama Desk, Outer Critics Circle nominations), In the Next Room or The Vibrator Play, The Wedding Singer, Nine (starring Antonio Banderas). Other distinguished theater performances include Perdita in The Winter’s Tale at the Williamstown Theatre Festival, Anne in A Little Night Music at the L.A. Opera, Eileen in Wonderful Town, and Rosabella in The Most Happy Fella, both for City Center Encores! Her television credits include recurring and guest appearances “Younger,” “The Detour,” “Supergirl,” “Law & Order: SVU,” “Nashville,” “The Good Wife, “Elementary,” “Nurse Jackie,” “The Big C,” NBC’s “The Sound of Music Live” and as First Lady Melania Trump on “The Late Show with Stephen Colbert.” 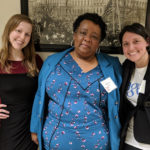 What happens when the heroes of Stonewall descend on Capitol Hill?Articles