In honor of Black History Month, SAGE is publishing a series of posts from our diverse partners, constituents and allies. This post was originally published on the Diverse Elders Coalition’s blog. Dr. Imani Woody is the Chair and Program Executive for SAGE Metro D.C. and is the Founding Director and CEO of Mary’s House for Older Adults. 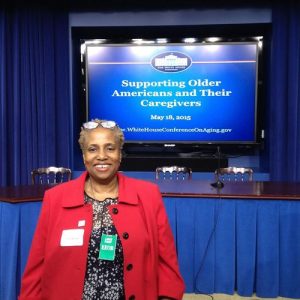 I have been thinking about what it means to be me: an older, African American out lesbian, wife, mother, grandmother, caregiver, educator, and CEO, living and working in the United States. In 2008, the words Audacity of Hope and hopeful came to mind, in reference to then President-Elect Obama’s book, The Audacity of Hope and my experiences.

I was born in segregated Washington, DC in a time when nonwhites couldn’t eat in dining establishments; when people of color were treated at two medical hospitals, Freedman’s, the hospital for Negroes, or DC General, the city hospital. It was a time where my parents would have to go back “home” to North Carolina to vote for President, where a retired professional was found living in a chicken coop, and being outwardly gay, lesbian, bisexual, transgender or anyway same-gender loving carried a mentally ill diagnosis from the American Psychiatric Association’s (APA) Diagnostic and Statistical Manual of Mental Disorders (DSM-I).

Fast forward to the 1960s, which are indeed a time of hope. Mary Church Terrell has won her lawsuit and leads a successful movement to desegregate public facilities in Washington, DC; Ethel Percy Andrus, after finding a retired woman living in a chicken coop, leads two organization to create decent living conditions and financial stability to elders, and Bayard Rustin, an openly, gay, Black man and confidante to Dr. Martin Luther King, Jr., is one of the key organizers of the 1963 March on Washington. The Voting Rights Act of 1965 becomes the law of the land. The audacity of hope – things can change.

The 70s bring marriage and a son, and I open an independent Black school for young people to learn African history; DC has its first gay pride march and the APA removes homosexuality from the DSM. The 80s bring the enactment of the Martin Luther King, Jr. federal holiday, the Vietnam Veterans Memorial is dedicated in DC, and I join more than 5 million people to make a chain in the Hands Across America campaign to fight hunger and homelessness. Me, I recognize my love for women, come out to my son, and divorce my husband.

In the 90s, Clinton signs “Don’t Ask, Don’t Tell” into law; I find an increased commitment to advocate for people of color, elders, women, children and people who identify as lesbian and gay. I volunteer and sit on boards and committees of organizations to promote the health and wellbeing of people who look like me.  The audacity of hope – things can change.

Early in the new millennium, Washington, DC adds sexual orientation and gender identity to its Human Rights law, Massachusetts is the first state to legalize same-sex marriage, and I start working at AARP, joining the small, dedicated and growing movement working to embrace LGBT into the meaning of its “whole person” inclusiveness. At AARP, I work to change policy to include domestic partnership for staff and members, organize the first AARP LGBT 50+ reception at a LIFE @50 event, and sponsor Services and Advocacy for Lesbian, Gay, Bisexual and Transgender Elders’ (SAGE) 30th Birthday Conference Celebration. I become the chair of SAGE Metro DC, an affiliate of SAGE, in part to reflect the presence of older, gay, Black people. Older out LGBT people are visible at AARP. Older, out Black LGBT people are visible at SAGE.  The audacity to hope – things can change.

However, the more things change the more things remain the same. Black elders as a whole are still over represented in the lower economic strata. Elderly Black people are being pushed out of the public housing that they have lived in for decades. The Supreme Court voids the formula that protects voting rights. LGBTQ elders are going back into the closet because it’s too hard to be old and gay. Workers are still marching and campaigning to receive a decent living wage. Black men, women and children are being killed by the police in record numbers. LGBTQ people continue to be killed at an alarming rate and the murder of Black transgender women is still the highest.

This brings me again to the audacity to hope, that things can change and that things do change. Amid racial tension and atrocities, a Black man is completing his second term as the President of the United States of America. A police officer was indicted for killing an unarmed black person – in Georgia. Senator Elizabeth Warren, along with other white, Black, Asian, Jewish, Muslim, Spanish, female, male, Transgender, older, younger, middle class, working poor, retired, truck drivers, teachers, students, professionals, housekeepers, parents, children, politicians, actors, undocumented residents, and citizens created a hue and cry to remind everyone that Black Lives Matter.

As an older, African America, out lesbian, wife, mother, grandmother, caregiver, educator, and CEO, living and working in the United States, I have witnessed events that give meaning to Jesse Jackson’s “Keep Hope Alive.” I am forever grateful to stand on the shoulders of Black folks like Sojourner Truth: “Ain’t I a Woman Too?” W.E.B. Dubois: “Either the United States will destroy ignorance or ignorance will destroy the United States.” Fannie Lou Hammer: “…And whether you’re from Morehouse or Nohouse, we’re still in this bag together.” Maya Angelou: “And Still I Rise.” Nikki Giovanni: “Show me someone not full of herself and I’ll show you an empty person.” Audre Lorde: “When I dare to be powerful, to use my strength in the service of my vision, then it becomes less and less important whether I am afraid.” Barbara Smith: “One of the greatest gifts of Black feminism to ourselves has been to make it a little easier simply to be Black and female.” And Eleanor Holmes Norton’s (“You can’t win what you won’t fight for”) audacity to hope, to advocate for action that leads to change. Such change, in turn, leads to an audacity to hope.

Note: This is an adaptation of a piece written in 2008 for The Spectrum Newsletter Fall/Winter Vol II Issue 3.